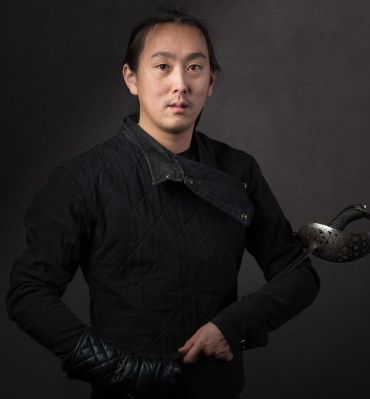 Kevin Murakoshi
After a childhood of swinging sticks around pretending they were swords, a chance meeting introduced Kevin to Historical Fencing. Kevin’s interests span 16th century fencing through the modern Olympic style. As a result Kevin is equally at home fencing with a rapier as he is with an electric epee. He is a certified Master at Arms in Classical Fencing from the Sonoma State Fencing Masters Program, and holds a Prevot d’Epee certificate from the USFCA
Kevin is co-founder of the Sacramento Sword School, a coach at the Davis Fencing Academy, and a visiting instructor at the Sacramento Historical Fencing Academy. Kevin is faculty at the Sonoma State Fencing Masters Program, and has taught seminars at WMAW, SoCal Swordfight, Riposte Harlem, KWAR and SERFO. Within the SCA, Kevin is a ninth generation White Scarf and a member of the Order of Defense. He was formerly Cadet to Don Puck Oneshoe, with whom he continues to work. Kevin will be available to work with participants in Italian rapier, foil, saber, and epee.
Kevin’s research interests include methods of applying modern and classical pedagogy to HEMA, and the evolution of fencing theory within the Italian tradition. As a fencer, Kevin’s primary systems are 17th century Italian rapier, Meyer’s longsword, and late 19th century Italian saber.
So you want to learn to use a sword?

Thanks for contacting us!

We will be in touch shortly.
If you contacted us outside of business hours it might take us a bit longer to respond.